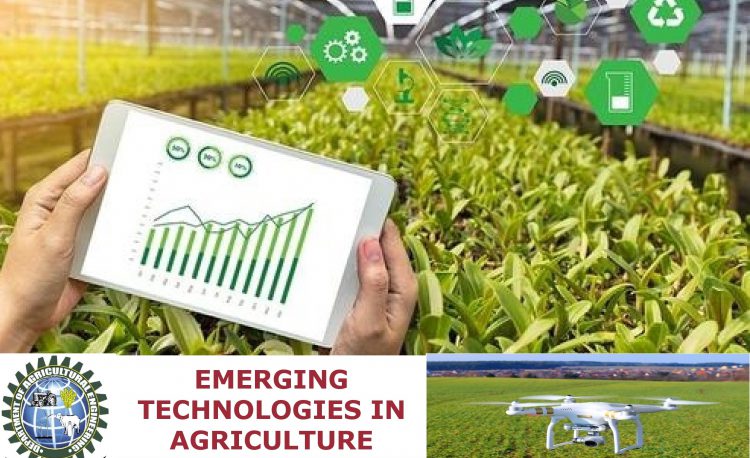 Role of Technology in future development on Agriculture

Agriculture is the oldest profession of Mankind. The need to progress on Agriculture will certainly increase due to simple fact that population is increasing while resources like land and water are decreasing exponentially.

In Future agriculture will use sophisticated technologies such as robots, temperature and moisture sensors, aerial images, and GPS technology. These advanced devices and precision agriculture and robotic systems will allow farms to be more profitable, efficient, safe, and environmentally friendly.

Precision farming is an approach where inputs are utilized in precise amounts to get increased average yields, compared to traditional cultivation techniques.

Precision agriculture (PA), satellite farming or site-specific crop management (SSCM) is a farming management concept based on observing, measuring and responding to inter and intra-field variability in crops.

Aerial imagery is captured using a satellite or a low altitude aircraft, such as a plane or a drone. The spatial resolution displayed on the image is dependent on both the camera and the flight height of the aircraft.

The main advantage of aerial imagery is its ability to provide a bird’s eye view of your farm. A single image provides you with access to rich data about your crops, without having to step foot out of your office.

Use of GPS Technology in Agriculture

The satellite-based GPS system was first developed by the U.S. Departments of Defense in the 1970s. The major advantages are Higher crop productivity. Decreased use of water, fertilizer, and pesticides, which in turn keeps food prices down. Reduced impact on natural ecosystems. Less runoff of chemicals into rivers and groundwater.

Vertical farming is the practice of growing crops in vertically stacked layers. It often incorporates controlled-environment agriculture, which aims to optimize plant growth, and soilless farming techniques such as hydroponics, aquaponics, and aeroponics.

Vertical farming has many advantages such improving crop yield, allowing crops to be grown throughout the year, being weather independent, and using only 10% water compared to traditional farming. It also has aesthetic sense when used in urban areas.

Artificial intelligence holds the promise of driving an agricultural revolution at a time when the world must produce more food using fewer resources.

Precision agriculture uses AI technology to aid in detecting diseases in plants, pests, and poor plant nutrition on farms. AI sensors can detect and target weeds and then decide which herbicides to apply within the right buffer. Deep learning algorithms process data captured from drones flying over their fields

It is also used for Determining the optimal time to plant and harvest, & for Reporting weather conditions.

Applications of Data Science in Agriculture

Data analytics can be used in the accumulated bulk to obtain information which can be used by farmers to optimize their farming. Farmers can thus make smart farming decisions using that information throughout the production cycle; from planning, plantation, harvesting, all the way to its marketability.

A driverless or autonomous tractor is a farm vehicle (often multi-purpose) that delivers a high tractive effort (or torque) at slow speeds for the purposes of tillage and other agricultural tasks.

Some of the most common robots in agriculture are used for functions like Harvesting and picking, Weed control Autonomous mowing, pruning, seeding, spraying and thinning, etc.

The automatic harvesting of fruits by a robot involves two big tasks: (a) fruit detection and localization on trees using computer vision with a sensor and (b) robotic arm motion to the position of the detected fruit and fruit harvesting by the end effector without damaging target fruit and its tree.

When buried in the root zone of turf, trees or shrubs, the sensors accurately determine the moisture level in the soil and transmit this reading to the controller. The entire irrigation is controlled through this input data.

The soil moisture sensor consists of 2 sensors which takes the values of temperature of surroundings and moisture level of soil. Output of these sensors are given to ADC and then to microcontroller. Microcontroller compares the values with the threshold values and drives the relay which controls the motor.

In effect this automates the entire irrigation system, making is more efficient and optimum for yield.

The use of sensors for the assessment of the apparent electrical conductivity is being used extensively.

A Balanced or proper Electrical Conductivity (EC) is necessary for optimum yield. In general, higher EC hinders nutrient uptake by increasing the osmotic pressure of the nutrient solution, wastes nutrients, and the increases discharged of nutrients into the environment, resulting in environmental pollution. Lower EC may severely affect plant health and yield.

The modern combine harvester, or simply combine, is a versatile machine designed to efficiently harvest a variety of grain crops. The name derives from its combining three separate harvesting operations—reaping, threshing, and winnowing—into a single process.

Laser Land Leveling (also known as Laser Leveling) is a process of smoothening the land surface from its average elevation with a certain degree of desired slope using a guided laser beam through out the field.

A laser land leveller- a machine equipped with a laser guided drag bucket- is much more effective and quicker in ensuring a flat table-top like surface. An even land means irrigation water reaches every part of the field with minimal waste from run-off or water-logging.

Protected cultivation is a process of growing crops in a controlled environment.

This means that the temperature, humidity, light and such other factors can be regulated as per requirement of the crop.  It assists in a healthier and a larger produce, and also in reducing the resources.

Zero Budget Natural Farming (ZBNF) is a farming practice that believes in natural growth of crops without adding any fertilizers and pesticides or any other foriegn elements. The word Zero Budget refers to the zero net cost of production of all crops (inter crops, border crops, multi crops).

Check Out our Posts on Emerging Technologies in Core Branches