State of App- from Monolithic to Microservices

Home>State of App- from Monolithic to Microservices 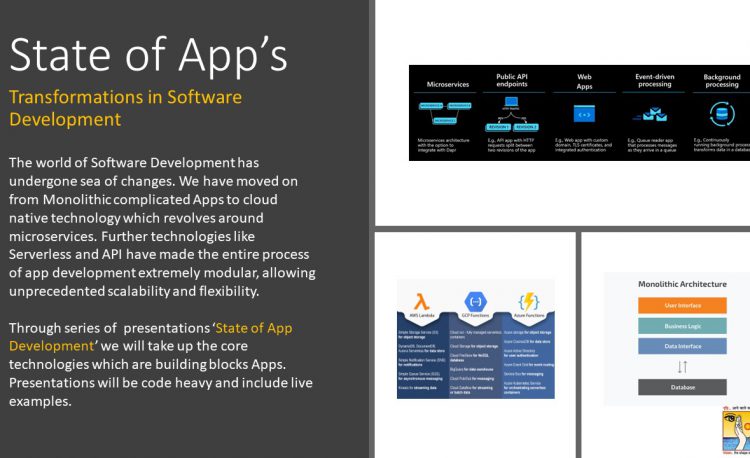 The world of Software Development has undergone sea of changes. We have moved on from Monolithic complicated Software to cloud native technology which revolves around microservices. Approaches like Serverless and API integration have made the entire process of app development extremely modular, allowing unprecedented scalability and flexibility.​ We have moved on from Software to App, from Servers to Cloud, and from Database to Unstructured NoSQL Data. We are witnessing unprecedented changes as we enter the age of ubiquitous computing, developed on foundation of cloud, ably supported by of Artificial Intelligence & Machine Learning, Internet of Things, Data science, Blockchain, and AR&VR.

10 Technologies of the future

One of the most important considerations would be to recognize the Technologies of Future. There are technologies whose emergence has been phenomenal to the extent of changing the way we work and look at technology on whole. These technologies are fast gaining prominence across all sectors globally and is global and today almost all organizations and thinktanks round the globe are working on them. Developer flow, Cloud ubiquity, Cloud Native, Unified Data, Models as Platform… A compelling read

For those related to the world of development and technology (who isn’t today?), it is essential to both understand the drivers which have called for these changes, as well as the path the technology is following. Vision Group of Institutions has adopted a systematic approach to allow our students and staff to

Monolith is a fully functional application bundled into a single package and is deployed as a single unit.  ​Initially a typical software has a universally accepted 3-Tier approach including the Frontend or UI Layer, the Middle Tier or Business Logic Layer and the Backend or Data Access Layer. As software grew more complicated, few developers started using different terms for layers like Persistence Layer, Business Logic, Data Interface, Server Management, etc. However for most it remained as Traditional 3-tier application architecture.

Simply speaking, the 3-tier application model is outdated. It was designed for application development before the proliferation of public cloud and mobile applications and has had difficulty adapting to the cloud. Over time, an application can become too large and complex to make frequent changes. It had Application instability, Application performance , Slow development , and Limited / No innovation​. Not only that, but it also requires the maintenance of at least three layers of hardware and software, which can be inefficient for the business.

We must take into account the rapidly changing purpose and role of software. Soon software had become ubiquitous; reaching out to almost all industries with varied requirements. We were looking at app to answer almost all questions of the business and everyday world. Further the way we were consuming these apps was changing from fixed desktops to remote, always-on world of mobile devices. This paved way for App Modernization.

From Monolithic to Microservices

One of the best choices for creating and running microservices application architectures is by using containers. Containers encapsulate a lightweight virtualization runtime environment for your application and allow you to move the application from the developer’s desktop all the way to production deployment. You can run containers on virtual machines or physical machines in the majority of available operating systems.

Many organizations use Kubernetes to manage containers and ensure that there is no downtime. Kubernetes provides container orchestration in multiple hosts and is used for container lifecycle management. You can automate deployment, auto-scale your application, and build fast and ship fast using Kubernetes.

Event-driven architecture (EDA) is based on decoupled systems that run in response to events. An event-driven architecture uses events to trigger and communicate between decoupled services. EDA has been here for a long time, but it now has more relevance in the cloud. If properly used, it can provide a significant increase in agility, cost savings, and operational benefits. The distributed serverless EDA can execute code known as functions that scale automatically in response to a REST API or an event trigger.

For the serverless model, there is no server management needed. The serverless model is also quickly scalable (so quick updates and deployment are possible) and it is stateless. Serverless computing helps developers to build powerful applications by eliminating the need to provision and manage infrastructure. In Serverless computing, cloud vendors provision, manage and scale the infrastructure as per the need.​

An application programming interface, or API, enables companies to open up their applications’ data and functionality to external third-party developers and business partners, or to departments within their companies. This allows services and products to communicate with each other and leverage each other’s data and functionality through a documented interface. Programmers don’t need to know how an API is implemented; they simply use the interface to communicate with other products and services. API use has surged over the past decade, to the degree that many of the most popular web applications today would not be possible without APIs.

An API is a set of defined rules that explain how computers or applications communicate with one another. (Typically these rules are documented in an API specification). APIs sit between an application and the web server, acting as an intermediary layer that processes data transfer between systems.

Here’s how an API works:

While the data transfer will differ depending on the web service being used, this process of requests and response all happens through an API. Whereas a graphical user interface provides humans access to an application’s data and functionality, an API provides that access to computers or other applications.

APIs offer security by design because their position as middleman facilitates the abstraction of functionality between two systems—the API endpoint decouples the consuming application from the infrastructure providing the service. API calls usually include authorization credentials to reduce the risk of attacks on the server, and an API gateway can limit access to minimize security threats. Also, during the exchange, HTTP headers, cookies, or query string parameters provide additional security layers to the data.

Advent of Artificial Intelligence is fast having impact in the holy grail of software development. We are witnessing tremendous work in the area of designing and developing code, as well as Front End by using Machine Learning capabilities. I have personally found three areas during my own app designing process where suggestions from AI came in extremely handy.

IntelliSense is a code-completion aid that includes a number of features: List Members, Parameter Info, Quick Info, and Complete Word. These features help you to learn more about the code you’re using, keep track of the parameters you’re typing, and add calls to properties and methods with only a few keystrokes. Check full details

Low Code or No Code is a new domain which is fast gaining prominence for Rapid App Development. This allows App to be developed with very little code knowledge. Organizations like Microsoft have made lot of progress in this with number of products. Express design in Power Apps, allows you to convert a hand-drawn sketch, PowerPoint, or PDF into a working application. Furthermore, you can customize the application, add more screens, and so on. This entire process does not require you to write even a single line of code. ​

Also Read the below

A look at the pillars of past, current, and future innovation. Check on the ‘Enablers‘ and the ‘Disruptors‘ which have already initiated the shift. Also read the Nine Shifts to help deliver this promise.